We take the name from dimension.spodnet.uk.com, which was a collection of mixed Unix hosts ran at a UK college from 1997 to 2004. Here is a quick collection of notes describing the history of the original system.

dimension’s original “About” page, wrote by argh - The sysop of Dimension Mk1.

dimension was born on 10th October 1997. An old computer was resurrected from the ashes and reborn. From its slavery under Windows 95, dimension was given a new lease of life under linux. The box in question was a Dell Dimension series with a Pentium 75MHz processor and 16MB RAM.

RedHat 4.0 was installed and I opened up the system in a ‘secure’ firewalled environment. A few users were granted access. News of the box spread in the local community until I was asked to put dimension on the net. 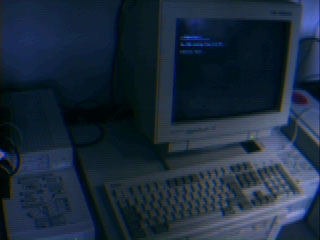 dimension (mark I) had been liberated in fall of ‘97, however the new year brought a lack of machines at work, its fate was deemed to be that of workstation once more. To keep dimension alive the server is now running on one of my home PC’s which I brought into work. It used to have Slackware on it and it was my main development machine for the past 3 years. After many processor updates from 486SX to DX2 to AMD DX4 (aw man that was bad), many hard disk updates, two new monitors, three new keyboards and three new cases, it now runs an Intel Pentium [233MHz] processor with 128MB RAM. Disk access is through an Adaptec 2940 controller card which run a 4GB Western Digital Caviar as well as a 9GB Seagate Barracuda….of course I could go on about it’s supralight speed 3x CDROM…but we don’t talk about that part.

dimension still runs on Redhat 4.2 (after an upgrade), under kernel 2.0.36. We nearly went Redhat 5.x but I found that a lot of older software was incompatable so we’ve stayed here till I fix the bugs…and to see

dimension now supports more than 30 users with ranges of interest from houses to horseracing, linux to loo rolls (okay no loo rolls). We hold the official Stagefright (still under construction…come on Tracey!) and Idlewild band homepages. We run a Linux user group (thanks to qwaszx et al. for that one), IRC server, MUD and loads of other services to keep our members happy, as well as drag the Internet community to us.

From the “Servers” page:

dimension is part of a much wider family of linux servers

the domain name [spodnet.uk.com] itself is registered to a friend who has given me some DNS space. It’s not that I couldn’t go out and get my own name, it’s because of the family, and kin is kin.

dimension itself is now, finally, after some months of relative obscurity receiving some attention [19501 hits Feb 1999]

servers in our family include:

max is the latest brainchild of tek, who was a founding member on dimension. Although the URL belongs to this server, max is actually held in another protected area.

time is an old friend of dimension. time runs on an Macintosh 8500 Power PC and runs Linux PPC.

federation is a Silicon Graphics Indy R5000 which helps us out with a little webcam problem.

revolution is a Dell Dimension P75T overclocked to 90MHz. it’s owned by scrump who’s been a user of dimension for many a year…well almost from the start.

Its difficult to identify what changed, but we suspect that during 2000 there was a change in circumstances for “argh”, the operator of dimension. For a long period the systems have been hosted under ‘spodnet.uk.com’ but they were switched to ‘h3o.org’. From the archives we can see that his aim was to offer dimension out to a wider audience. Unfortunately, a large section of the userbase slipped away from dimension as the cross section of college attendees that used the system started to move on university.

The original dimension popped offline some time in 2002. Some of the original users still frequented a IRC channel called #dimensionx, a small spin-off from the IRC server hosted on dimension itself, but even this morphed into another entity.

Around June 2020, nikdoof discovered the tildeverse and had a throwback to his experience with dimension during his college years. Instead of joining one of the existing servers he decided to create a new home for the ‘dimensionites’, if they would ever discover it again.